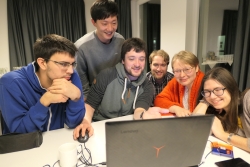 The IRTG is a joint research program established by the Faculty of Mathematics at Bielefeld University, Germany, and the Department of Mathematical Sciences at Seoul National University, South Korea. In a truly international and competitive environment, doctoral students study singular and random systems.
The IRTG concentrates on advanced techniques from the mathematical field of analysis including geometric, stochastic and numerical analysis together with latest developments in neighboring fields such as mathematical physics and probability theory. The focus is on the mathematical analysis of problems which generically exhibit singular features or randomness. The topics include stochastic dynamics, stochastic partial differential equations, machine learning, nonlinear wave equations, integrodifferential equations, random matrices, generalized Dirichlet forms, analysis on manifolds and fractal metric spaces.

Please send all documents listed below as one single PDF document to irtg@math.uni-bielefeld.de. Please mark your application with the identification code: Wiss22832.
Incomplete or incorrect applications will not be considered.

The official job announcement can be found here.

If you have any questions, feel free to contact the IRTG office (irtg@math.uni-bielefeld.de).